[PONDER THIS] ALL SOULS DAY – ARE YOU NURTURING YOUR SOUL :) 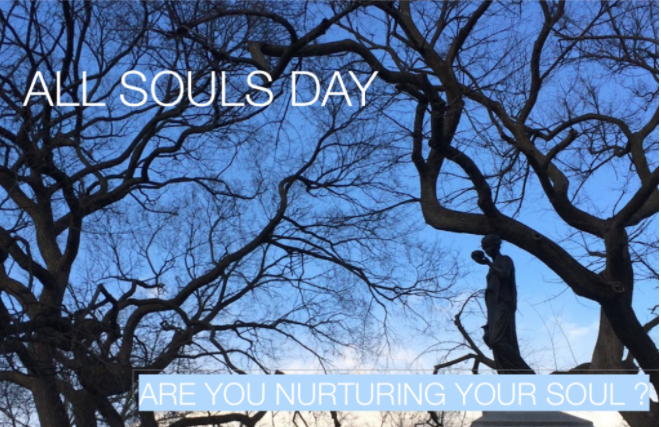 Traditionally, this is a time to pray for all the departed souls you have known. It can be considered taboo, talking about people who have died, but it’ll happen to us all. So, it seems kind of important to talk about it, right?

You’re best able to nurture your soul when you put yourself around what I call ‘sparkly’ people. These people are the ones you feel a sense of ‘HECK YES!’ from when you are in their company. When you think about speaking with them, or catching up with them, you feel a strong ‘HECK YES!’ in your soul.

They are the precious treasures in this world – the ones to look after, listen to and make time for.

But I wonder if you have some HECK YES people who have departed from this world? I know I do – so I wanted to tell you about two of my HECK YES people. Even after your HECK YES people have gone, by telling their stories, you are still nurturing your soul.
I’m going to tell you two stories of two very different but both very special HECK YES men in my life.

The first I knew for only seven days…

His name was Azriel Cohen.
I only spent 10 hours with him, but he had one of the biggest impacts on my life.

The first four hours started at The Happy Smoothie Shop, in Chiang Mai, around the corner from the apartment I had been living in for the last six months. For two months, Azriel and I had both been hearing about each other through our mutual friends who frequented that same smoothie shop.

The Happy Smoothie shop was run by Addy, whose smoothies ROCK, btw, and who makes a mean coconut water, spirulina and fresh lime juice blend – I called it my Green Blood hit, and I had it every day. Anyway, all our friends said, ‘You have to meet each other.’
And on this day, it finally happened.

Anyone who knows me knows I usually book everything weeks, sometimes months in advance. But when I lived in Chiang Mai, I had thrown my diary out for the year – so it was all open and completely left to chance.

That day I walked into Addy’s, and there stood Azriel. We were introduced and there we stood, literally in one spot, for four hours, in what felt like a bubble from the rest of the world … talking, talking, talking. No one and nothing interrupted us – or if it did, we took no notice. It was clear there was no stopping the communication and connection that we were in.

His heart was huge. His mind was diverse, acrobatic and expansive. His insight was profound.
His kindness, joy and care were inspiring. As we talked, it became clear there was overlap in our passions. He had explored aspects I had no knowledge of, having spent much time in war zones. I had explored aspects unfamiliar to him, having spent decades working intensely on people’s bodies.

We discovered, as we spoke, that in the middle, the essence of what we had discovered was the same: how you can tap into your body and its instincts and have them be your compass for your life.

We wanted to do some work together. But he was about to get on a flight to Bali in two days and then back to New York for two weeks before returning to Chaing Mai, where we were both living.
We agreed to meet the next day. Which we did. The conversation continued as intensely as last time, but this time for six hours and, thankfully, sitting down in a tea shop.

He then flew to Bali and on to New York, where very unexpectedly, he went to bed one night and never woke up.

The experience of meeting Azriel, and how we shared so much in such a short amount of time, reminds me of how precious life is. There were tears and a deep sadness when I heard the news about Azriel’s passing. But mostly, I felt and still do feel so deeply grateful to have met him.
Grateful for the hours we shared.
Grateful for the conversations that nourished our souls.
Grateful because our interaction focused me, offering me the reminder I will now have for life, which is to treasure each moment.

I became curious and wanted to know more about Azriel, so I looked up an article about him and his life  (<<< you can read that here) to see who else’s life he had touched.

Here is a video Azriel made before he passed away.

My second story is more personal and someone I knew for 7 years.

It was 1998. I walked into work, a pub in a little English village called Sonning-on-Thames, a tiny place but well known for its fancy food and for being the home of Uri Geller, the famous magician who could bend spoons with his mind.

I had just finished college, and I was ready for a summer of freedom and fun before starting to think about what I wanted to do for ‘work’. But what happened next was the last thing I expected – for the first time in my life, I saw someone who literally took my breath away. I was only 18 years old. I went to the bathroom to ‘calm myself down.’ When I returned, he asked me out. That is the day our seven-year romance began.

Seven years – which were amazing – but anyone who has been in a relationship for seven years knows that with that time comes a fair share of ups and downs … and our relationship was no different.

There was a large age difference between Sebastiao and me – about 13 years difference. This caused friction in a few areas. Sebastiao was a little crazy and impulsive … which, whilst mostly fun, was also sometimes very dangerous. I was very young, and whilst very mature for my age, I was unaware of the signs of drug abuse or his wanderings into other beds. Ironically, Sebastiao was also highly jealous and suspicious of other men around me. Even though, to be honest, I only had eyes for him. Nonetheless, it was difficult to remain friends with any of my male friends or form any new male friendships. Having grown up with two brothers, I get on great with men as friends.

Our time together was fun. It was freeing, it was unusual, it was unexpected and full of adventure. Sebastiao was the life and soul of any party.

During our time together, he taught me:
Boundaries in relationships and in finances.
To be wild and daring.
To search for an answer.
To question everything.
To live by what I am most passionate about.

Six years into our relationship, he was diagnosed with Hepatitis C, Lymphatic TB and AIDS. Three things that within the year would lead to his death. And three things I am grateful to say I am completely clear of. One of the many little miracles in my life.

I was, of course, incredibly sad as I had thought we would spend the rest of our lives together. But what surprised me most was that on our first date he told me, ‘I am going to die young.’ And so he did.

That seven-year journey was what I now call my degree in Life. One that I have no piece of paper for, other than my slip of bankruptcy in 2006. No certificate to show, but what I know for sure is no book or lecture could have transmitted the lessons I learnt in those seven years. And I am grateful for every second and for listening to what felt right.

To all of you, your words, and our interactions, bring me so much laughter and joy. I feel like the luckiest person alive to share this journey of life with you.

So now, over to you. I’d love to hear your stories, who inspired you.
Who do you know who has passed away and whose story you would like to tell? What things did they do that nourished your soul?
Share in the comments below.

If you know anyone who you feel could benefit from this post, then go ahead and share it with them.

You never know how your actions ripple out to others….just be true to who you are…that is the stuff of magic 🙂 #quote @SavannahAlalia